Enjoying each and every day 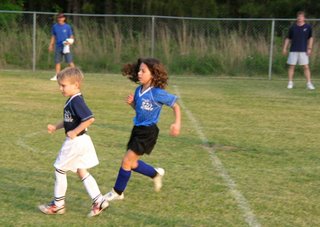 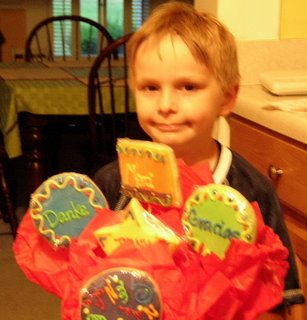 I should never update in the middle of the night. I can't think straight. I wanted to tell you how much fun Ryan had being Kerri's assistant at camp. He is such a great helper. He handed out forms, called Bingo, and told everyone the rules for camp. We had gone over two rules before we left: no smoking and no bikes, skates, or scooters. He had wanted to take his bike so I had to get out the rules and show him in black and white! The pictures are from last night's soccer game and a special treat that was delivered yesterday. Our sweet nurse, Dawn, sent us a bouquet of cookies. He is taking one to school today for his snack!! The cookies are because we nominated her for a nursing excellence award that is being sponsored by the AJC and several Atlanta hospitals. They received over 200 nominations and Dawn is currently in the top 10!! I think they will name 3 winners at a luncheon on May 10. Les, Ryan, and I are planning on going to the luncheon. It will be great to see her again and I personally think she will win, but I have first-hand knowledge of what a great nurse she is. I plan on calling the clinic today as I haven't heard anything about Ryan's catecholomines yet. If I get any news I will post, and I am going the fix the link to Tommy's site. Please check on them and offer some prayer and encouragement. As always, thank each of you for checking in on us and keep little Ryan in your prayers. We are praising God everyday for Ryan's cure and the love and support from our family and friends. Love, Les, Missy, Heidi, Will, and SuperRyan

All done with shots, whew!

Sorry, no new pics. I got out the camera early Sat. morning to take a few pictures and the battery was dead. What a bummer! We had a great time, as usual. We are so thankful to everyone at Camp Sunshine for another great weekend together as a family to just focus on being together and having fun. Ryan is excited to be going to Jr. Camp in June for a week so this was another great opportunity for him to meet more counselors and be even more familiar with the surroundings. I think he is going to do just fine. Will usually meets a new boy or two that he can hook back up with at sibling camp, but this year it was a GIRL. Oh my, he is growing up. Matt came over and played on Sunday. Ryan and Matt always have such fun together. Monday morning's shots went as well as could be expected. He won't have to have anymore for a year!!! We hit Target afterwards and bought an accordian. He has been wanting one, and it seemed like as good a treat as any. Ryan has an interview this afternoon with the Winder paper. They are going to do a story on him being the Youth Ambassador for Relay. His soccer team lost their game last night, but have another game tonight. He was pretty sore from his shots, and I asked him if he wanted to skip it, but he insisted on playing. He said, "If I can beat cancer, I can do this!". No word yet on his urine test. Maybe we will hear something in a few days. I will post when we get results. Thanks for checking in with us and thanks for your many prayers for Ryan and his friends. Love, Les, Missy, Heidi, Will, and SuperRyan 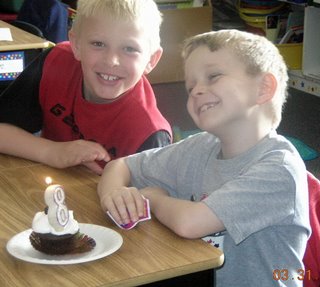 This picture is from a few weeks ago. Ryan had decided he wanted to take cupcakes to school for his birthday, but his birthday is in July. No problem, we can celebrate it any time! I was surprised he didn't expect a present. :) I dropped his urine off at the lab in Athens this morning so we won't have any results until next week. He goes back Monday for the second round of immunizations. I really dread it. It will make for a tough beginning to the week. He has 3 soccer games this week so I hope it doesn't make him too sore. We are heading off to family camp this evening. I hope we don't get totally rained out! One thing is for sure, my massage won't get rained out! I am definitely looking forward to that. Hopefully, I will be able to post some pictures Sunday or Monday of the kids having fun at Camp Sunshine. Have a great weekend. Love, Les, Missy, Heidi, Will, and SuperRyan

Happy Easter! We have had a fun day, but we sure missed Daddy!! We had a wonderful lunch at my mom and dad's and hunted lots of eggs. Ryan left some carrots out for the Easter Bunny last night. Les went to visit his Uncle Bob in Calgary. He was able to visit with him on Thursday, Friday, and Saturday, but he passed away about 5 minutes after Les was with him on Saturday night. Fortunately, Les' brother Jim, cousins Kim and Brent, and Uncles Allan and Emil were with him, also. Les went ahead and came home as planned. There will be a memorial service sometime next month in Manitoba. I know he had a great visit with everyone and is so glad he made the trip to see his Uncle Bob. Ryan is feeling great. He has standardized testing this week. I can't seem to get him to take anything too seriously. I don't know if it has anything to do with his treatment or not. I sort of think that is just the way he is. He doesn't care about winning or losing games, or making great grades. It isn't that he is apathetic. He just does his best and that's it. MAJORLY different from Will. :) The kids are all begging to get them up when Les gets home. Normally, I wouldn't even consider it, but it is amazing how that ugly six letter word can change your outlook. Have an awesome week. Thanks so much for your prayers for Ryan. Love, Les, Missy, Heidi, Will, and SuperRyan

Spring Break was the break we needed 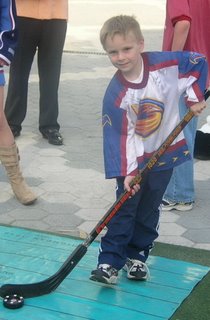 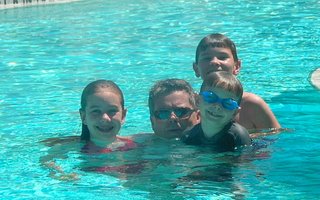 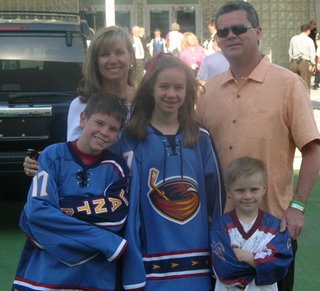 Wow! I can't believe it has been so long since we posted on Ryan's site. That's what normal and healthy gets you, and I will take it! :) We will be hitting the lab in Athens some time next week for a recheck on the catecholomines. I don't put much stock in that, but it makes me feel better just the same. I have never heard of a relapse being found by these numbers. We had an awesome trip to Tampa for our Spring Break. We saw Tampa Bay Lightening play the Atlanta Thrashers on Thursday night, and it was an exciting game decided in overtime and a shoot out. Tampa Bay loves their hockey and makes it a fun night for the kids. They played on a huge inflatable outside the rink, shot pucks, played games, and ate all the Dippin Dots they could possibly hold. On Saturday TB played Pittsburgh. Ryan has become quite the fan. He had his face tattooed and painted to show his spirit. Les' friend, Mike, brought all the kids jerseys. Ryan did not want to leave his side. He definitely has a new friend in Mike. We also got to visit with 2 of my uncles who live in Clearwater and a good friend of ours in Tampa. The kids really enjoyed playing with Anderson, Julia, and Klair, and we are so happy they are moving back to Atlanta. Busch Gardens was a lot of fun. We could not have asked for better weather. So,we are 4 days back to school and the kids are off again tomorrow. We are going to see Ice Age 2. We are heartbroken to hear about the relapse of our little friend,Tommy Algard. Tommy was at transplant with us for relapsed brain tumor. They are currently looking into other treatments. Please pray for their family. Also, please pray for Jay's family. He passed away last week from a brain tumor. He was a sweet little boy we met last year at family camp. They are going to have such a hard time, but they have an incredible faith. Thank you so much for your prayers for Ryan. Please keep praying that his cancer or NO cancer will ever return and that he will grow into a fine, spirited old man. -And thank God for his cure! Love always, Les, Missy, Heidi, Will, and SuperRyan