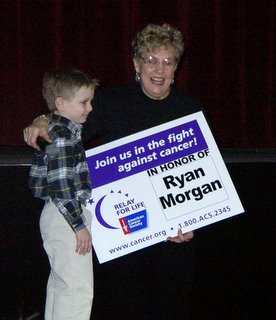 Ryan has continued to feel good. No more complaints. Tonight was the official kickoff for this year's Relay for Life. He got an awesome introduction from my good friend, Karen. We have been so blessed to have her love and support from Day 1. He basically thanked them for choosing him, told them to have fun, raise lots of money, and party on! Short and sweet, just like him.
So, in the hopes that more people will not have to walk in Ryan's shoes, go walk a mile in your community's relay for life and raise money to find a cure. By the way, it has been 365 days since Ryan has spent a night in the hospital. He was hoping we could celebrate that by staying up late. Nice try, don't you think? Thanks for checking in on us and please keep praying for our precious Ryan. Love, Les, Missy, Heidi, Will, and SuperRyan

Ryan is doing so great!! He took a short nap on Saturday, and woke up feeling so much better. He hasn't had any more nausea and hasn't complained of any pain. He played at Matt's for several hours on Sunday, and just had a ball. They have a cute new puppy. He went to school this morning and was back at karate tonight. I have no idea what was going on with him. I know he played football pretty hard in the yard on Thursday with Will and my brother, and that is all I can figure out. I keep going back to something Dr. Rapkin has told me a few times- look for something that comes and stays. Let's just hope and pray that whatever it is, it doesn't stay and we have seen the last of it. Thank you all for your prayers. I know that the Good Lord is listening. I would also like to ask you to pray for my aunt. She is having a PET scan this week. We are afraid she has lung cancer. Love, Les, Missy, Heidi, Will, and SuperRyan 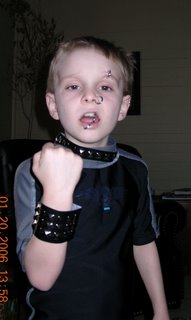 Let me catch you up on our past few days. We heard from Erika on Thursday about Ryan's catecholomines. The one that had risen to 10 last month was back down to 4.8 (yahoo) and the one that was 7.9 came down to 7.0-both in the normal range. As much as we discount the value of these numbers, we sure hang to them when we need them as a positive sign of Ryan's health. I haven't posted just hoping I would get some answers first, but we don't have anything yet. Ryan started complaining of his chest hurting when he took a deep breath Thursday night. It was worse Friday morning so we went to the pediatrician. His lungs sounded good and his bloodwork was normal. We had a chest x-ray at St. Mary's which I thought was going to be a little un-nerving, but thank Goodness they have renovated the front of the hospital, and it didn't even look the same as it did when Ryan first got sick. The x-ray was normal. We had a good breakfast/lunch at IHOP, and he felt well enough to make a trip to Party City to spend some of his Christmas money. Thus, the picture. He went Gothic on me. He also got a bamboo cane, which he was extremely proud of because it was "real wood", a Zorro sword, and a voice changer so he can sound like a monster or an alien. He felt pretty good most of the afternoon and started feeling bad again around dinnertime. He started complaining of his stomach hurting, and has been nauseated, but hasn't gotten sick. He kept a sharp eye on his cinnamon donut this morning, and even took it with him to the dr's hoping he would feel well enough to eat it. Les called and said he ate about half on the way to St. Mary's, keeping the other half just in case he threw up. Now that's what I call strategic donut eating. He keeps his "Fear Factor" bucket close by. Our pediatrician sent them back to St. Mary's for an influenza test, since Ryan had his shot in Dec. That, too, came back negative. He has perked up since then, though. I know he is troubled by this pain, and is worried. He asked me the other night why Alex' cancer never went away, and he and Will asked about Ethan. I didn't feel I had too much choice, but to tell him about Ethan's passing. I don't want to frighten him or worry him, but I want him to know that he can always trust our answers. So please, stop what you are doing and pray that: a) we get some answers to what is causing him to feel bad, b) that it is something we can treat and resolve quickly, and c) for Ryan not to worry. Love, Les, Missy, Heidi, Will, and SuperRyan

Just a quick update to let you know that we heard from our wonderful nurse, Erika, at SR today. Since they have changed labs, the urine results are likely to take a week, so we may not hear anything until Thursday or Friday. There are a few other things happening, too. Ryan has been asked to be the Youth Ambassador for this year's Relay for Life in our county. We will learn more at the kick-off celebration next week, but he is excited about it. It will be special as my good friend, Karen, gets to introduce him. It was evident that Dr. Rapkin is gearing up for St. Baldrick's coming up on St. Patrick's Day. He has been letting his hair grow back. Ryan would love to shave his head. There are locations all over the country where people will shave their head to raise money for pediatric cancer. If you think you could do it or would like to donate money to this great cause, you can visit www.stbaldricks.org for more information and some great pictures. Ryan hasn't been feeling that great yesterday or today, it may be a touch of a cold coming on. He left for school today with no complaints. Please continue to pray for his good health.
Keeping the faith, Les, Missy, Heidi, Will and SuperRyan 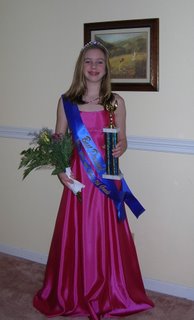 First we had the Prince of Hope, and now we've got a Blue and Gold Queen. Thanks to our family and friends for coming out last night to support Heidi. We could not have been more proud of her. Ryan and Will went home with their friend, Jackson, after the pageant, and Heidi's friends came home with us. Everyone got to play today; the boys in the dirt at Coach Mark's house and Heidi and her friends at the mall-how very typical. The kids are happy to be out of school tomorrow for the MLK holiday. We are hoping to get his catecholomine numbers, and will probably take in a movie with some friends. Please continue to pray for Ryan, that he stays healthy and happy. Love Les, Missy, Heidi, Will, and SuperRyan.

We celebrated 2 more anniversaries this week. Today marks one year since Ryan's second stem cell rescue. I am so glad that last year the 13th did not fall on Friday :) He went to Chucky Cheese with Matt, Will, and Dad to celebrate. Will gave all his prize tickets (willingly) to the boys. We are so proud of him. He is learning to be empathic. On Monday we celebrated that a whole year has gone by since Ryan had chemo-one very long year. He had a good check-up on Thursday. Dr George said he looked "perfect". His counts were all good, and we should get the catecholomine results early next week. If those numbers are good, Ryan won't have to go back to the clinic for 3 months!!! Wow! I can't imagine not going back until April. In the interim we will be able to get his catecholomines checked at a lab in Athens. Tomorrow we will be cheering on Heidi as she participates in the Miss Blue and Gold pageant for Apalachee High School. Thanks, Jena, for all your help. Maybe I can put a picture on the website tomorrow. If you haven't been on Catie's site, you don't know their good news. They found no cancer. Another answer to our prayers. Please keep praying for Ryan as each day, month and year are so important to keep putting behind him! Love Les, Missy, Heidi, Will and SuperRyan 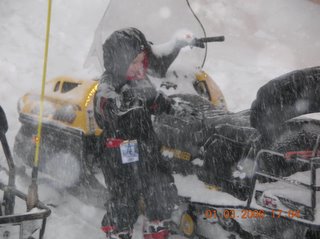 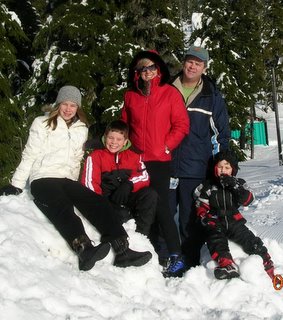 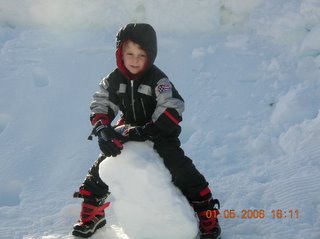 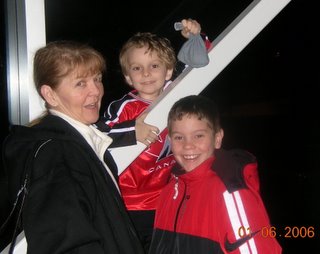 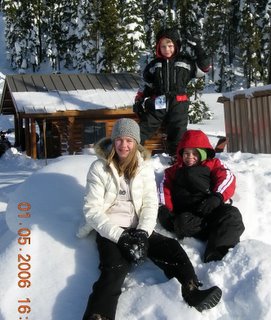 Even though Gramma and Grampa's is a pretty nice place to be :) Well, after a good night's sleep in our own beds it was back to business. We had a full day of sport pictures and basketball games today. All turned out good! We had such a nice visit with Les' parents and many good friends. We kept the kids busy skiing, tubing, swimming, and skating. Ryan even got a ride on a snowmobile!! The trip home wasn't too bad. The kids were ready to go see their Nanny and Granddaddy just as soon as we got home, and so they are spending the night there tonight. Les and I get to unpack, yippee! We are all about ready to get back into our routines. Ryan has his monthly check-up on Thursday. It has been nice to check up on our all our cancer friends since we got home. Please say a prayer for our friend, Catie, as she has surgery on Monday to remove tumor from her brain. Thank you for your prayers for Ryan, please continue to pray for his cure here on Earth with us. Love, Les, Missy, Heidi, Will, and SuperRyan